Teresa was asked to write about her family's history for Transformations, a history of Italians in Canada. Here's the article.

The Italian Canadian Experience - Building Community From Behind the Deli Counter

Today, the Italian Centre Shop has grown into a family of businesses—a major retailer, wholesaler and distributor of specialty imports, grocery and fresh produce to stores and restaurants throughout Western Canada. This is the legacy of Franco (Frank) Spinelli and his devotion to providing for the growing immigrant community of Edmonton (and beyond) the authentic tastes and traditions of the homes they often reluctantly left behind. My father, Frank Spinelli, saw the specialty grocer/deli/café and gathering place he provided as a tool to build community, acceptance and belonging.

Frank Spinelli was born in San Pietro al Tanagro, in the region of Campagnia, in 1926. He left the warmth of southern Italy in 1951, to try his luck in the freezing silver mines of the Yukon. This was hard work, but Frank never shied away from hard work. In fact, he welcomed the opportunity to earn a steady pay envelope. Steady work was not easy to find back in southern Italy.

A bad back injury landed Frank in a hospital in Edmonton, Alberta. He was in traction for a year and a half, followed by an intensive period of rehabilitation courses. Needless to say, his mining days were over! While still recovering in 1959, he pooled the little money he had saved and with his partner, Remiro Zalunardo, they bought the original tiny store on the corner of 95th Street and 108th Avenue.

Figure 1: The original Italian Centre Shop, circa 1960. Source: Courtesy of the Spinelli family.

At first, the Italian Centre Shop sold Italian magazines, pop, and chocolate. But with a steady stream of Italian immigrants flooding into Edmonton, Frank and Remiro were constantly asked to bring in all kinds of Italian specialty products. These traditional favourites, like authentic Italian coffee, cheese, cured meats, pasta, cookies and panettone (Christmas sweet bread), made immigrants feel much more at home in their adopted homeland.

With a growing business and promising future, Frank returned to Italy in 1960, to marry Rina Quagliarello, a hometown beauty favoured by his mother. My grandmother’s strategy was really quite simple. If her son Franco married a Canadian girl, he would probably never move back to Italy. But if he married Rina, he would have even more ties to San Pietro al Tangaro. The only problem with my grandmother’s plan was that for a long time, Rina dreamed of living on the other side of the ocean! 2 The Italian Canadian Experience © 2016 Frank, Rina, Pietro and Teresa Spinelli 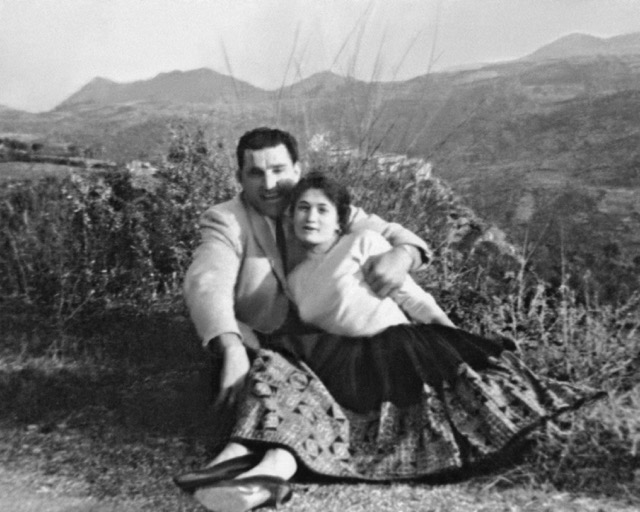 After they were married, Rina joined Frank in Edmonton and worked hard in the family business as a cashier. Frank and Rina wasted little time starting a family of their own. I was born on October 13, in 1961. My brother Pietro followed in 1963. With both parents working long hours in the family business, growing up was quite an interesting experience. My parents proudly told their friends that I took my very first steps down the pasta isle of the store. My father worked seven days a week. My brother and I looked forward to ‘helping him’ in the store. For us, the store became our second home.

1960. Source: Courtesy of the Spinelli family. 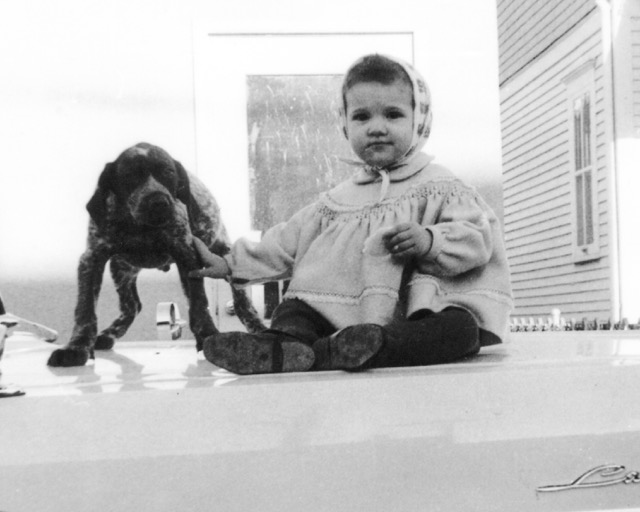 There was always something new to discover in the store. In time, it became very natural for us to follow in our father’s footsteps as adults. When our mother’s work day in the store was done, she had to tend to her growing family. This caused her to work a double shift every day, but she never complained, after all, she was living her trans-Atlantic dream!

Figure 3: Teresa Spinelli with the family dog, circa 1963. Source: Courtesy of the Spinelli family.

In the early 1960s, my father became a celebrity in Alberta for leading a vigorous lobby to legalize winemaking in homes. Working with a group of enthusiasts, including Tony Falcone and Alberto Romano from Calgary, they eventually convinced the provincial government to remove the Prohibition-era restriction on home brewing and winemaking. The law was finally changed in 1964, the same year my father took full ownership of the Italian Centre Shop. 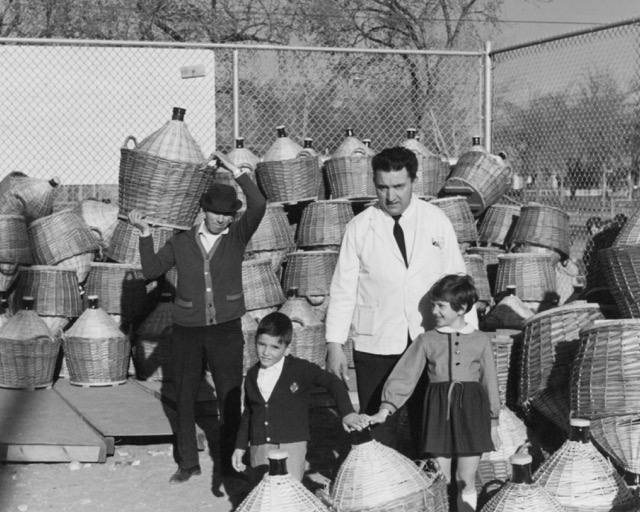 The change in the law was a great boost for business. Frank soon became the biggest supplier of Italian grapes (40,000 cases in some years) and winemaking equipment in northern Alberta. Truth be told, well before 1964, my father had already been selling cases of grapes to many of his regular customers. He probably figured they were just interested in fruit juice and grape jam! Tongue-in-cheek, he put up a large sign reminding customers about the ban on homemade wine. His sign read: “You can make wine, you just can’t keep it!”

Figure 4: Frank, in his trademark white jacket and black tie, poses with his children during winemaking season, circa 1967. Source: Courtesy of the Spinelli family. 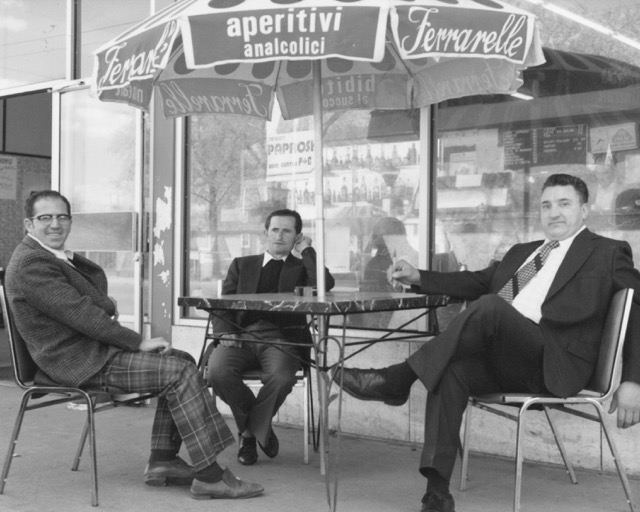 The Italian Centre Shop always was, and always will be, much more than a grocery store. In the early days it became a gathering place for churchgoers on Sundays, and for the young men who enjoyed sharing meals and card games with my father. In recreating the ‘piazza’ (town square) ambience of their youth, my parents turned their home into a popular retreat for patio cookouts and social gatherings. In the store, food was often prepared for employees.

Figure 5. During his time off, Frank (right) enjoyed sitting outside his bar and playing cards with friends. Source: Courtesty the Spinelli family. 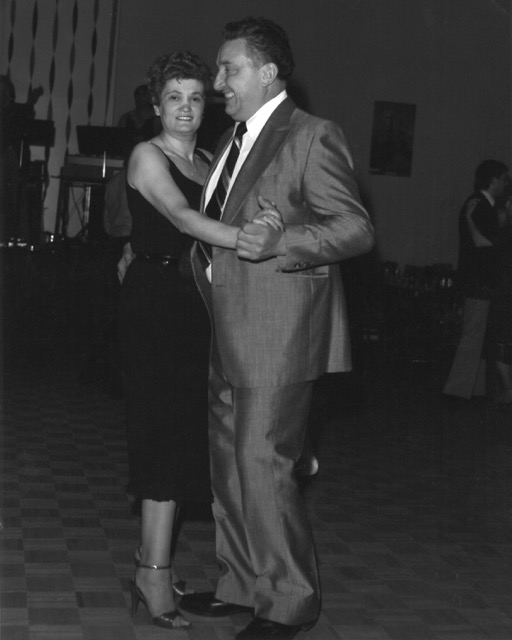 My father was always there to help out his customers when he could. He helped some to find work. He taught others how to drive. He helped some to complete their income tax returns. A customer once told me that my father gave him a ride home, when he found him walking home with his grocery bags, after shopping at the rival Safeway store. Frank also extended his influence into the community at large, by encouraging Italian news broadcasts on local radio stations, arranging Italian performers to entertain in Edmonton, and building relationships with local politicians and the greater business community. 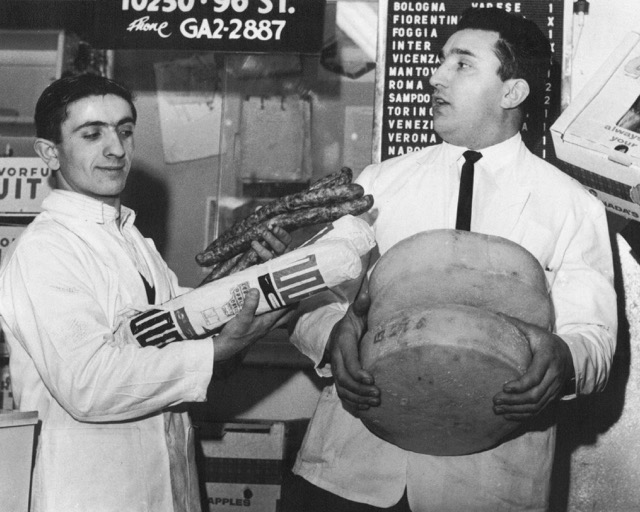 The family business became a local landmark. With the ever-expanding grocery and deli operations, separate warehouses, and two homes, the family’s holdings were the largest in the now bustling and busy neighborhood that grew to become Edmonton’s ‘Little Italy’. In 2009, an article in the Red Deer Advocate affectionately referred to my father as ‘the godfather’ of Edmonton’s ‘Little Italy’. Edmonton Journal columnist Judy Schultz noted that Frank Spinelli had almost single-handedly managed to “turn on” all of Edmonton to a taste of Italy.

Figure 7: Frank working behind the deli counter, circa 1985. Source: Courtesy of the Spinelli family.

My father taught me to treat everyone the same, with courtesy and respect. He was the best example for me of ‘the more you give, the more you get back’. He helped many immigrant families when they fell on hard times. Frank’s motto was “Mangia oggi. Paga domani!” (Eat today. Pay tomorrow!)

This extension of credit, on a simple hand shake, is a kindness still remembered by the children of these immigrants. Many remain our loyal customers to this day. My father preferred to do most of his business on a handshake. Yes, sometimes he did get burned! But he built his business on treating everyone with respect and kindness, and the vast majority of his customers treated him with respect in return. In the end, most became loyal, lifelong patrons of the Italian Centre Shop. 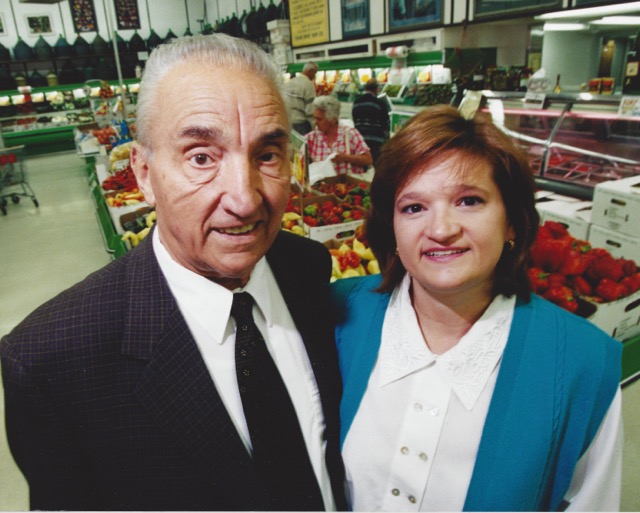 My parents were a remarkable team together. They both worked very hard. Frank had a strong and outgoing personality. He enjoyed being with friends and he did not shy away from the spotlight. My mother was the exact opposite. She preferred to always work quietly in the background. Her first priority was her family, but Rina always did all she could to support my father and to help grow the family business.

Figure 8: Frank and Teresa in the family business, circa 1995. Source: Courtesy of the Spinelli family. 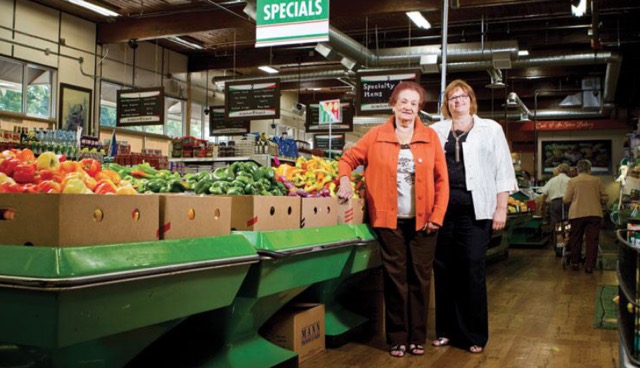 The plan was that when my father retired, my brother would take over the family business. That was the way succession was supposed to happen according to southern Italian culture. However, life is always full of surprises. My brother, Pietro, died suddenly in 1996. Needless to say, our family was devastated. Shortly after, my father was diagnosed with terminal cancer and he passed away in 2000.

Figure 9: Rina and Teresa Spinelli, in their Italian Centre Shop, circa 2012. Source: Courtesy of Ryan Girard and the Spinelli family.

I reluctantly decided to take over the family business, to continue the tradition started by my father. Looking back, I would have preferred to spend more time with my son Massimo, who was born in 2007. The transition was difficult. Many employees still thought of me as the little girl who used to play in the store. For many Italians, the business world was not an appropriate place for women. My own mother had difficulty thinking of me as the boss. For her, the most important thing for me was to cook for my family.

My father was an outstanding human being. He was well known, respected and admired. I had very big shoes to fill. No one, including me, was sure that I could do it. The first thing I did was to call an all-staff meeting. This was something my father never did, but I had to put an end to rumours that the family might sell the business. I also joined a group of local business owners to discuss common struggles such as staffing, wages, stress management and tax planning.

One of the first things I learned was that if I continued to work so hard being the cashier, balancing tills, hiring, and putting out fires, I would have no time to work on planning for growth. So I broke the unwritten family rule and hired outside professionals to help grow the business.

A company-wide profit sharing plan was implemented, to encourage employees to take ownership for everything they did for the business. I also encouraged staff to come forward with ideas to improve the business. Some of the best ideas have come from our employees! And almost all of these ideas have been implemented. These changes have increased productivity and improved profits. In the company’s first year under the profit sharing program, the store’s profitability improved by almost 75 per cent after profit sharing payouts.

Since the store was at full capacity, by 2003, a second – bigger and more upscale – location was opened in the south end of Edmonton. A third location was eventually opened in the west end of the city. In the summer of 2015, a new location was opened in Calgary. The Calgary location features more than 600 types of meat, cheese and antipasti, including specialties like Sardinian Truffle Pecorino, a cafe with authentic Italian treats and pastries, and a giant ‘Cathedral of Cheese’ including 80 wheels of quality imported cheese. 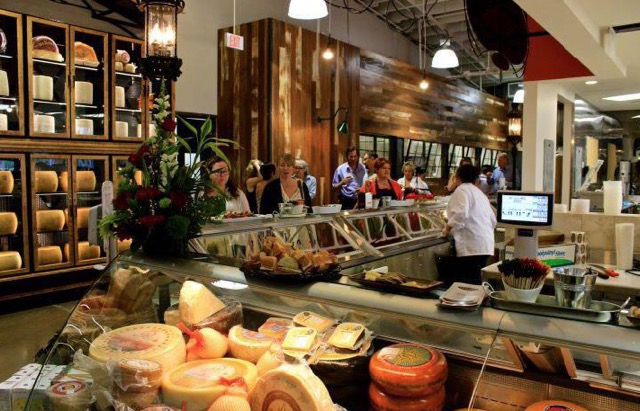 Figure 10: The Calgary store with part of the ‘Cathedral of Cheese’ visible in the far left. Source: Courtesy of Ryan Girard and the Spinelli family.

Frank Spinelli’s legacy is flourishing in Alberta. We have also continued his tradition of heartfelt community building. Working with the Giovanni Caboto Society, we revitalised the local park, supported a number of inner-city organizations, and helped develop the decorative signage and street furniture that now characterize our ‘Little Italy’ neighbourhood. Dad would have been very proud! 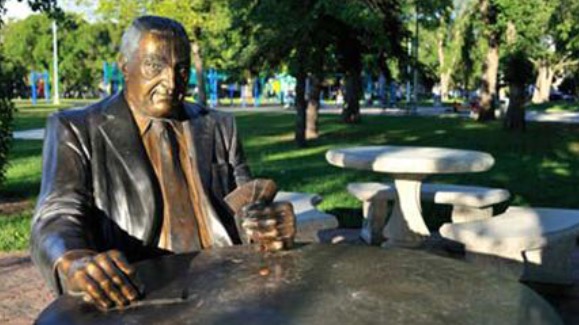 Figure 11: From his vantage point in Giovanni Caboto Park, Frank Spinelli still watches over the community, and the family business, while studying his Italian playing cards. Source: Courtesy of the City of Edmonton and the Spinelli family.