Celebrating Canada's 150th Birthday with heartwarming stories from our family of suppliers who chose to make Canada home.

The promise of a job building a military base in brought him to Alberta, but he arrived on a September morning only to find the job gone, the snow falling and no warm clothes. He borrowed money to buy a coat, and a three-month stint in Grande Prairie laying railway tracks got him on his until the winter shut down construction.

On the move again, he landed a job making steel bedsprings for Canadian Bedding (now Sealy) in Edmonton for 75c an hour. He saved everything he could and four years later paid the passage for his two sisters and parents to come over from Italy. At work, Sal’s skills with his hands quickly earned him a rise through the ranks, eventually landing the company a contract for fifty thousand top quality office chairs. “We made them so well,” he smiles proudly, “I still see them around the city, half a century later!”

Knowing his limited written English meant a management position at the bedding company wasn’t going to happen, Sal left his job of seventeen years to set up a gelato store with Concetta and her brother Berto Bertuccio. Who would do that in 1981, in the middle of a recession, with interest rates on business loans at 15-20% in a city where people didn’t even know what gelato was? “You gotta be a little crazy in business, to take the risks,” Sal smiles.

Talk about ahead of its time! Maybe it was the 32 , the quality of Alberta milk or the commitment to local berries and ingredients. People were soon driving from Spruce Grove for a destination Sunday jaunt. “A lady with a Rolls Royce used to bring her dog for a scoop,” Sal remembers fondly.

Soon they were all working seventeen hours a day. By 1982 Pinocchio was selling nineteen thousand 95c a month, forcing another move to a new factory/store on 124th St. and 109 Avenue.

Great timing, because Italian Centre Shop founder Frank Spinelli asked Sal to make tubs for sale in his grocery store in 1987. The two men were great friends, with a shared passion for building the Italian community in Edmonton, and particularly the Ital Canadians soccer team, for which Sal was the Treasurer, Frank the founder.

What also sets Pinocchio gelato above the rest is a very low air content–at about only 30%, compared to many as high as 130% air: actual ingredients. Pinocchio guarantees a thick, velvety, creamy lick every time.

Tom’s got big plans to make his dad even more proud and continue the family legacy. The re-designed packaging has been a great success. He’s looking around for the perfect individual sized gelato tub, which will open up many new markets. “A big part of my job is also predicting taste trends, which change every year,” Tom explains. “That’s why I just came back from the trade fair in Rimini, the same one my uncle went to when he brought back our original gelato recipe, more than thirty years ago.”

“My dad taught me to takes risks,” smiles Tom, “So within a year, I’m mortgaging the house to pay for the new packaging and machinery that’ll boost capacity seven and a half times the volume we do now.”

That’s about ten thousand of gelato a day, opening up new markets across Alberta and Canada.

“He’ll do it,” Sal pronounces, looking up from sticking labels on the tubs in the work-room covered with photos of Tom as a baby, a young man, a teenager. Maybe the real reason Sal, quite frail now, is still working at 87 is so he can still spend time with his son. Maybe the secret ingredient that makes Pinocchio ice-cream so special is the love this father and son team share for each other, and the of love they make together. 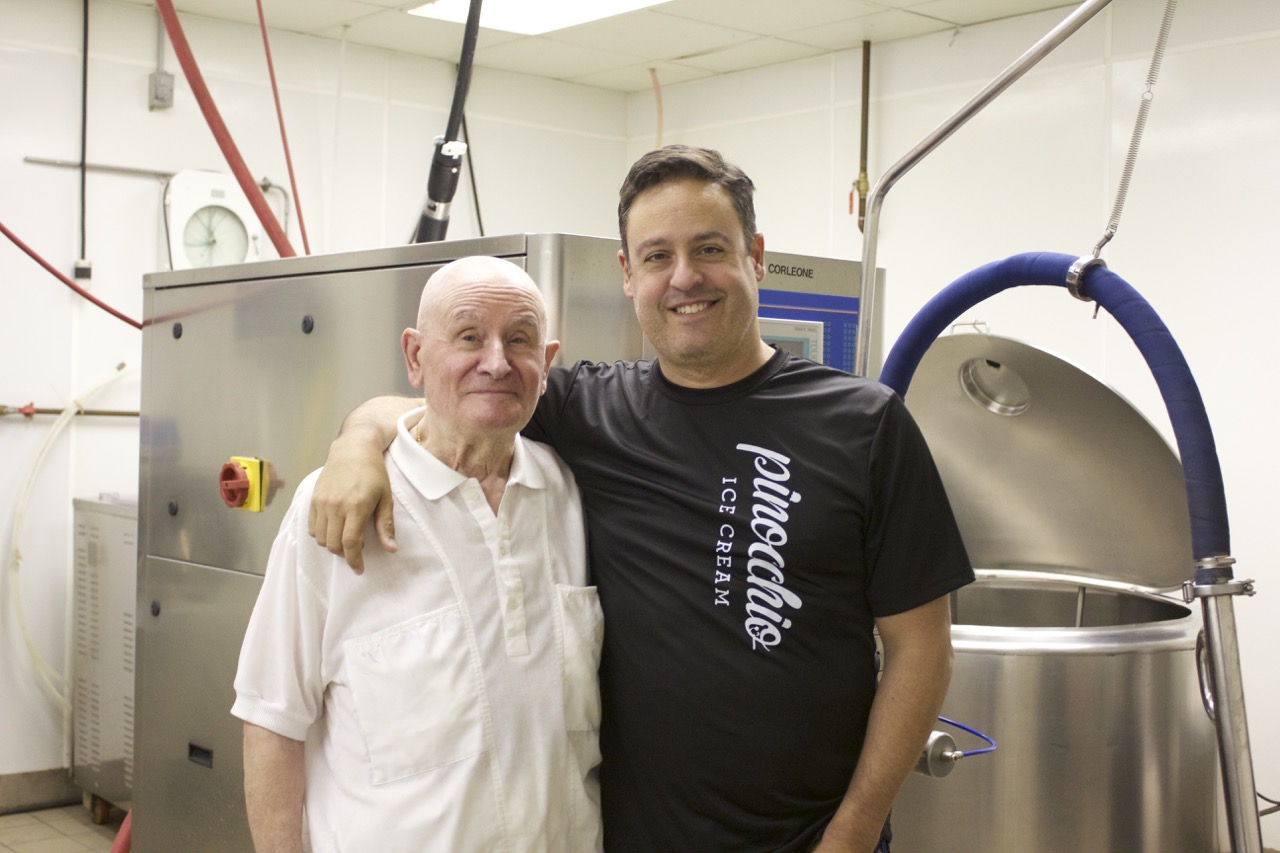