Celebrating Canada's 150th with heartwarming stories from our family of suppliers who chose to make Canada home.

“Where else in the world will you see an East Indian man making cabbage rolls and pasta?”

The stories of our frozen pasta suppliers begin, as they do for so many other Canadians who have made their home here, in different countries and on distant shores. But a common theme infuses their tales: each family settled here at least a generation ago and transformed memories of home and a love of great meals into a thriving business.

“Everyone needs to eat and everyone enjoys eating good food,” says Hussein Kanji, operations manager of Troika Foods in Sherwood Park. “You share stories around a meal. It brings people together and they’re really focused on each other.”

On chilly January nights, steaming bowls of gnocchi or tortellini are comfort food that enriches the soul, says Barbara Tornifoglia from her Ontario Ravioli office in Hamilton, Ont. She describes pasta as “the staple of a healthy family meal, where family and friends gather at the table to eat, drink vino and be merry!”

After December’s elaborate and time-consuming holiday menus, a meal featuring frozen pasta is a treat because it’s so simple. Boil a pot of water or set the oven to heat while you toss together a salad, and you’re done, with time to spare for what’s important.

Our store freezers also boast Ontario Ravioli’s pastas and sauces, including their ever-popular jumbo cheese ravioli. “All of our products are based on my mother’s authentic, home-style, old-fashioned recipes, from the sauce to the pasta,” notes Barbara Tornifoglia.

The recipes are seasoned with the flavours of Salerno, where Barbara’s mother, Santina Rispoli, learned her cooking skills as a young bride. But the cliff-side town overlooking the Mediterranean had been severely damaged during the Second World War. Like so many immigrants before and since, Santina and Antonio Rispoli chose Canada because they hoped for a better future.

“My parents needed to be self-sufficient, independent and strong-willed to make a name for themselves. There was no room for failure. They had a family with three children to feed, clothe and keep a roof over our heads.”

Ontario Ravioli officially started full production in 1973. Her mum’s role? “Well, let’s just say everything, from production to packaging to sales to shipping and receiving. She was basically the heart, the foundation and the glue that kept us together as a family business.”

Her dad, she adds, did “pretty much all of the above, adding salesman and delivery man” to his duties.

These days Santina still visits the plant, but at 81, she’s happy to leave the details to Barbara and her two brothers, Ciro and Eugene.

The Kanji family story begins even further afield. It starts in East Africa and weaves its way through Ukrainian cabbage rolls and Italian tri-colori tortellini, adding yet another bright element to Canada’s multicultural mosaic. 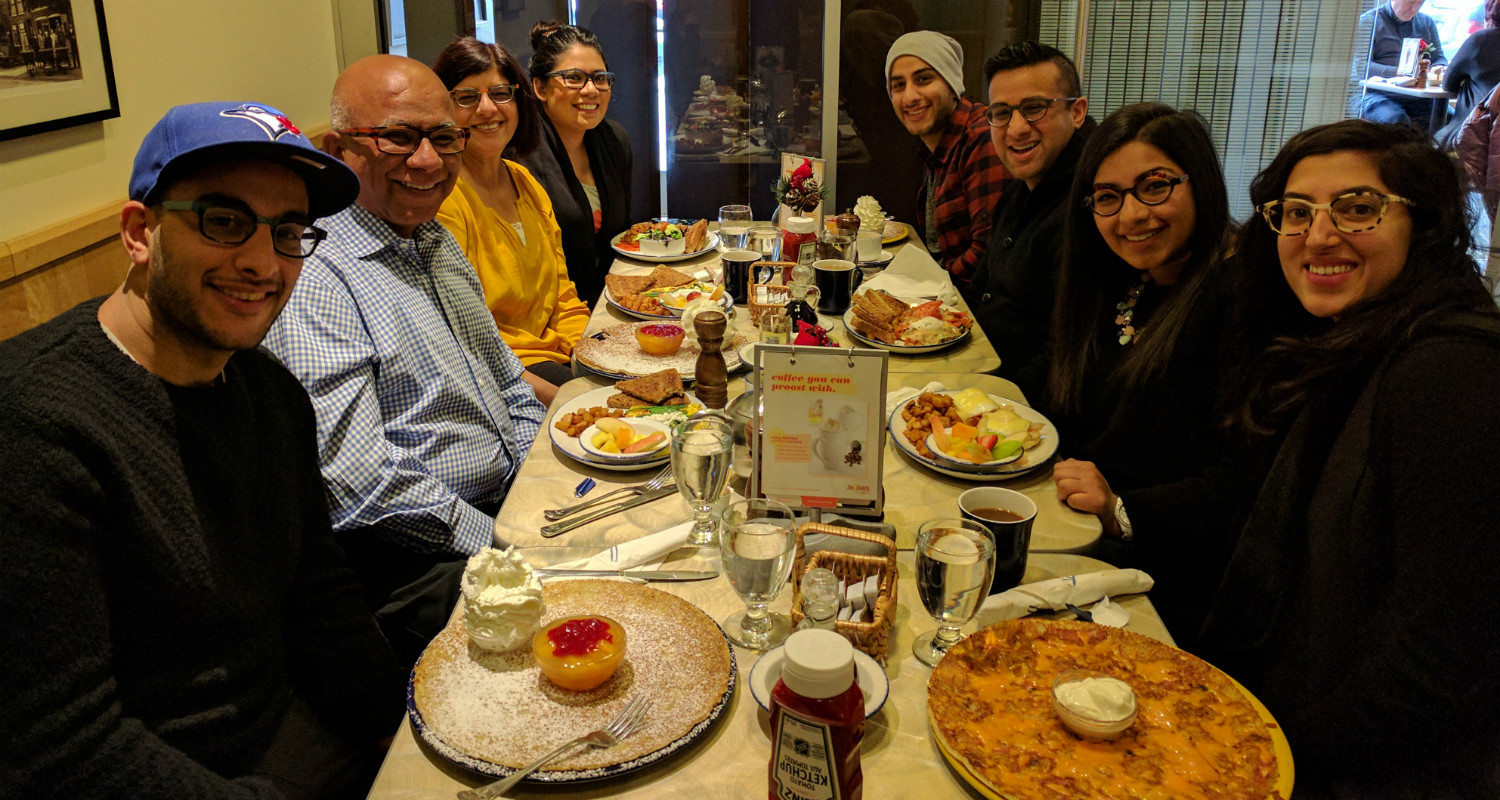 Hussein left, sitting in front of dad Alaudin at a family dinner out. Pancakes & pizza.

Pasta Time stays close to its Italian beginnings, with traditional recipes such as garlic gnocchi and cheese and wild mushroom tortellini. But at home, the family often reaches for the dishes that speak to them of their past.

“My mum’s samosas….” Hussein begins, then pauses to savour the memory of their taste and texture.

When the operations manager of a food company still swoons over his mother’s cooking, you know he’ll keep a keen eye on what goes into your pasta pot.