Fall is truffle season and this delicacy is celebrated with fairs and festivals throughout central and northern Italy. 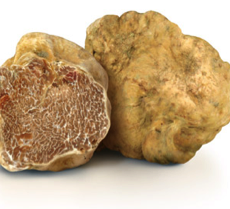 White truffles are a sensuous smelling and pungeant fungus. They can be shaved paper thin on top of pasta, salads or eggs, but used sparingly because of their strong taste and high price. Black truffles are less pungeant and taste syrupy sweet. They are more often used for infusing salt, honey, cheese, oil and cheese and vodka.

If you haven’t tried Moliterno Black Truffle Pecorino yet, please give yourself this treat. Made from raw sheep’s cheese, the cheese is aged first to develop it’s own character and then the truffles are injected later. This really is a show-stopper.

The truffle fungi grows near tree roots and are hunted by specially trained pigs, (banned in Italy since 1985), and more recently dogs. The scent of a truffle is similar to boar saliva, which attracts the sow.

Italian truffles are mostly white, those in France black. They also grow well in Oregon and Southern United States and were introduced to Australia in 1999.

In Italy, truffles are found primarily in the regions of Piedmont, Tuscany, Umbria, and Le Marche. One of the largest and most prestigious truffle shows is the 84th annual Tartufo Bianco D’Alba, (the Piedmont town of Alba!) held on weekends starting 11th October until November 16. http://www.fieradeltartufo.org/2014/it/ . There’s a market, fair, wine pairing events, celebrity chefs, lectures, tons of entertainment and exhibitions, and even a truffle auction A foodie delight.

The self proclaimed “truffle capital” town of Acqualagna in Le Marche and also Sant’ Angelo in Vado, near Urbania both hold a white truffle fair on weekends from the end of October to mid-November.

In Umbria, the town of Pietralunga holds its Mostra Mercato del Tartufo, Trade fair of Truffles, in mid-October. Citta di Castello holds the Truffle and Forest Products Fair in November.

There are several Emilia-Romagna festivals. In Savigno, in the hills southwest of Bologna, there’s the Savigno Sagra del Tartufo (truffle) the first three Sundays in November. Sasso Marconi, in the province of Bologna, holds a truffle sagra the first weekend of November. Calestano, in a pretty setting in the mountains south of Parma, holds a Black Truffle Fair every Sunday from mid-October through mid-November.

We bring in fresh truffles in early December and a wide range of truffle infused delicacies at the Italian Centre. Do come and try some.