Gold Medal Plates is THE culinary cooking championship – where chefs in each major city compete against each other for a chance to represent their city, later at national level. 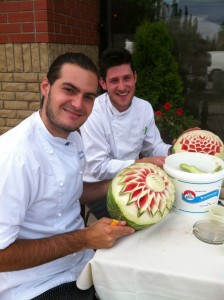 Each chef creates a regionally influenced appetizer and wine/beverage pairing. Each dish is judged on visual presentation, texture, taste, pairing compatibility, originality and wow factor by a panel of judges.

Read the full article in that latest edition of the Tomato Magazine here. Reproduced here with kind permission from editor Mary Bailey. 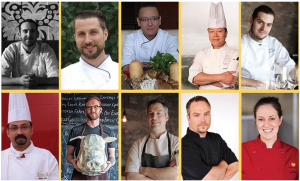 It’s The River House chef Steven Brochu’s first Gold Medal Plates. “We’re using all Canadian ingredients and wanted to show our sense of humour; the dish has some whimsicality. The competition is held in high regard and we’re ready to put ourselves out there.” Chef Brochu graduated from NAIT culinary, then spent time on the west coast, then a year teaching English in Taiwan before coming home for the exec chef position at The River House. “My favourite thing about cooking? Flavours and making people happy through food.”

Veteran competitor Shane Chartrand, exec chef, Sage, says; “I’ve never been more excited, because of all the new competition. These kids work at or own some great restaurants out there. This is the first time I’m not doing seafood and the first year I’m doing an aboriginal dish. It’s taken a long time to create and I think the pay off will be worth it.”

Stephen Chung is part of the rejuvenation of Edmonton’s iconic Chateau Lacombe. His global cooking background includes hotels in Hong Kong, Belgium, Holland and most recently the Fairmont Hotel Macdonald where he became known as a master ice carver. This is his first time competing at Gold Medal Plates. “It’s good for all the chefs,” he says. “It’s exciting and I’m looking forward to it.”

This is Keoma Franceschi, exec chef of Massimo’s Cucina Italiana’s first Gold Medal Plates but by no means his first competition. Chef Franceschi is a native of Tuscany with several years experience cooking in south west Tuscany, Livorno, Florence and a stint at Michelin-starred restaurant Il Convivio in London, England. “Cooking is like a game, take a few ingredients and create infinite possibilities and dishes,” he says.

Sachin Joshi, the exec chef at the Fantasyland Hotel brings decades and continents of experience — trained in Mumbai, five years with Oberai hotels, on the Cunard QE2 10 years, (until he decided to stop floating around and get married ) two years with Fantasyland — to the competition. His philosophy? ”If you don’t plan to win, don’t participate.“

“My friend Brian at the Acorn won in Vancouver last year,” says Brayden Kozak, chef/partner at Three Boars Eatery. “He encouraged me to try it out. It’s pushing myself into an uncomfortable position; I’ll challenge myself, see how it goes, no expectations. I want to cook food with other talented chefs. Whatever happens, happens; at worst it’ll be a lot of prep, then a fun evening.” The dish? “Not solid on the dish, but it will be something that respects what we do at the Boars. We’ve been experimenting and testing flavours out with our red wine pairing.“

“Now that I have a new restaurant we want to showcase what we’re doing,” says Blair Lebsack, co-owner and exec chef of RGE RD. “We’re very proud of RGE RD and it’s nice to be asked.

“We’re still debating four different dishes. We want it to be something that reflects what we do on a daily basis. But, it will be with a white wine and the flavours will be bright; with so many dishes that night, we want to create something that cuts through the noise.”

“Just tasted the wine today,” says Ryan O’Flynn, Westin Edmonton’s exec chef and a first time competitor. “Between now and the competition I’m going back to London to eat and to sharpen skills. I’ll spend some time in the kitchens at Ledbury and Ducasse where I have worked before.”

His Gold Medal Plate dish? “Lighter is my strategy, different textures, obscure/novel ingredients. The dish will be classically inspired but kind of old world/new world in philosophy.”

Lindsay Porter, Mercer’s Catering’s exec chef’s Gold Medal Plates dish started with this idea; “we didn’t want to use just any old regular cut of meat. We’re doing something really savoury and local, taking unusual products and using in a different way. ”Why Gold Medal Plates? “I helped other chefs, David Cruz, Shane Chartrand, now it’s time to do it myself.”

Good luck, one and all.